Attached is a copy of the Grade 3 French curriculum that was handed out last night.

As we wrap up the first half of the school year, I wanted to share a few of the games and activities that we have used in our classroom. We have completed two units, one called ‘ Max et son crayon’ which revolves around people, objects and places around the school. Prior to the December break, we completed a unit called ‘Henriette se sauve’ which covered places, people and pets in the community.

We spend two periods each week on French grammar. We have started to conjugate verbs and use adjectifs possessifs and mots interrogatifs. I often use games in order to review different concepts. Here are some of the activities that we have done in class.

The goal of this game is to have the class work together in order to get all the way from A to Z. They must name a French word beginning with each letter, but only one student can speak at a time. The entire class begins the game seated in their chairs. If they have a word they can stand up and shout the word (a – avion), once the entire class is standing, they must then continue the game by sitting down and shouting a word. If there are two or more people shouting a word at the same time, then they must all sit back down and restart the game from the letter A.  Once the game is restarted, they cannot use a word which was previously used in a different round (avion). This is a fun and engaging game that I often use at the beginning of class in order to encourage French speaking. It can sometimes be a little frustrating for the students when they repeatedly have to restart the game, but their teamwork usually progresses and they feel quite accomplished when they finally get to the letter Z. I usually use this as a warm-up activity for 5 or 6 minutes at the beginning of class.

Place the song lyrics in order:

The students are presented with a new song that they have not yet heard.  No lyrics are given; they simply listen to a song with some familiar vocabulary. They are told not to take notes, and there is no speaking. They simply listen to the song one time without interruption. They then break off into groups of 3 or 4, and I hand out 10-12 slips of paper with parts of the song lyrics. I play the song two times while the students are in groups; their job is to quietly work together to piece the lyrics together from start to finish. The group with the fewest mistakes wins the game. 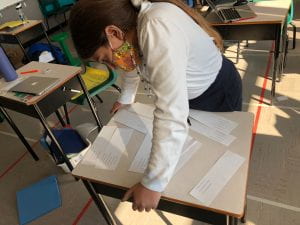 This is a writing activity that I do weekly with the Grade 3 class. The purpose of the game is to write as many words as possible over a set amount of time. I will usually start this activity in October and give the students ten minutes to write words. Before beginning, I always tell them not to worry about spelling. I encourage them to think in themes and begin writing each word that comes to mind. At the end of the allotted time, they count up their tally and write down their score. They can choose to share their number with the class, but it is completely optional. I try to reduce any anxiety by reminding them that they are competing against themselves, not peers. They will try to beat that score when we do the same activity the following week. Every second week, I reduce the amount of time by 1 minute (with the lowest being 5). I tell the class to be honest with their counting, and not to ruin the game by fabricating false numbers. For the most part, their number count goes up each week, and many students will have more words written down in 5 minutes in January than over 10 minutes in October. I find that this is a good game to play particularly when students are returning from gym class or a busy recess.  It calms them down and has their focus changed to French. 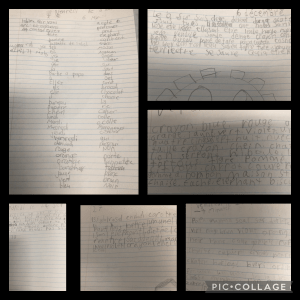 I choose one student to come to the front of the class, and an item is placed on their forehead. The rest of the class can see the picture; the task is for the student to use 10 questions or less to determine the card on their forehead. They must ask questions in French, but only questions with a yes or no answer. I put a sample list of French questions on the Smartboard in order to discourage any English. The class is told that they cannot give any hints to the participant.

This is a great game for encouraging French vocabulary in the classroom. I choose a theme that is familiar to the group (animals, fruits..). The first person must name an item, the next person needs to repeat what was last said and add a new word (you said banana, I say apple..). If you do not remember what was last said or you cannot name a new item, you are eliminated. To avoid any anxiety, I always preface it by saying that it is simply for fun. I usually keep the game going until there are one or two players remaining.  The players who have been eliminated are encouraged to keep listening in order to expand their vocabulary for the next time that we play.

I tape a sheet of paper in the 4 corners of the classroom. I highlight 6 sentences on the sheets of paper, and I divide the class into groups of 3. The students have 10 minutes in order to copy the text with the fewest mistakes possible. Each group has a designated workstation, and there is a messenger, writer, and editor. The task of the messenger is to run to their assigned sheet and memorize as many or as few words from a sentence as possible. The writer must write the sentences on the team’s bristol board, the editor then takes a look and makes any changes necessary. The group members rotate roles after each ‘round’. 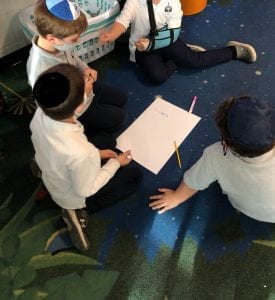 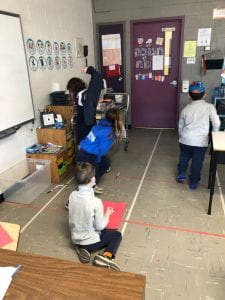 This game is best played in groups of 3 or 4. There are 80 Popsicle sticks with basic French vocabulary. Students take turns picking up Popsicle sticks; they must read and translate each term. They collect as many sticks as possible and ‘bank’ them. They can yell ‘bank’ at any point and count their total tally. If they continue playing they can accumulate more popsicle sticks, however, when they encounter a stick that they cannot translate, all of their popsicle sticks are returned to the pile.

The students are given a bristol board and placed in groups of 4. There are 4 rounds of 5 minutes. Each round has a different theme, and group members try to write out as many words fitting the theme as possible. Every correct word is worth a point and we tally the score after every second round. 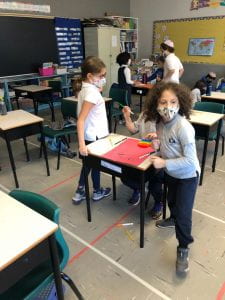 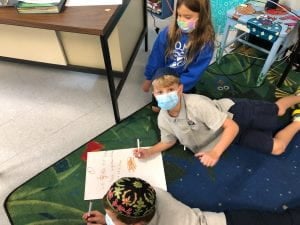 Attached are some links that I found helpful during our distance learning. These can be played at home in order to increase exposure to French. I’ve also included a few other recommendations for board games and videos.

We have been working on our French sentence writing over the past couple of weeks. We are learning  être and avoir.

There are plenty of games online, Francais Facile and Quia seem to be the most user friendly for Grade 3. I have included some of the better games below.

Attached is the Plan de Travail. It is due for Thursday ( I accidentally put down Friday).