Hi, I am going to talk about Ruach week.

On Monday it was mythical Monday.

On Tuesday it was tie-dye Tuesday.

On Wednesday each class got to do whatever they want to dress up as but in our class it was wacky Wednesday.

On Thursday it was Purim and we got to dress up as whatever we wanted.

On Friday it was PJ day and some classes got to watch a movie.

And that was Ruach week. 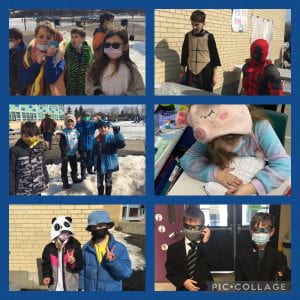 I like Purim because it’s really fun to see everyone’s costumes I like everybody’s costumes they wore Unique kind of and I liked my brother’s costume I like making the cookies and after we played games at my house and I like toys I got at the toy station and I liked the games but I was sad that my toys are gone but I got more toys it was fun to get more games I’m happy that I got more toys after.

Mythical Monday was really fun. Our class got the role dress up the first day was mythical Monday Aviv dressed up as a green tiger Ethan was two of spades and Nikki was a witch  Alex was a llama Ari was a dragon Gila was a computer mouse Orly was a unicorn Noa was a fairy and Livia was a vampire we all had great costumes and it was really fun and no one else had a costume and that’s it. I really liked mythical Monday because I liked all the costumes and it was just fun in general also I was a Balbasuar anyway bye.

By Jack K. and Nate

THE ONLY PART I LIKED ABOUT PURIM WAS MONDAY WEDNESDAY AND FRIDAY BECAUSE WE HAD GYM IT WAS FUN. I LOVE GYM. SPIRIT WEEK WAS ALSO FUN BECAUSE THE DRESSING UP WAS FUN. 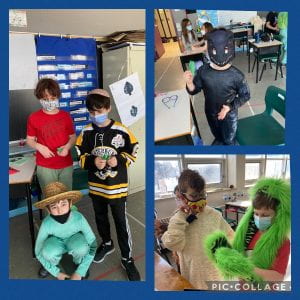 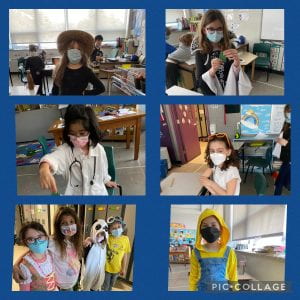 At school 🏫 last week it was Purim and every day we could dress up as a different thing like on Monday it was mythical Monday. I dressed up as a dragon🐉 and so was my friend Oren but he was a green dragon🐉 and I was a blue dragon and I had fun.

For Purim we made hamantaschen! And we needed these ingredients eggs, chocolate chips, orange juice, flour, sugar, and we used my auntie Liba’s recipe and my bubbie used that recipe too.

By Emma and Jack S.! 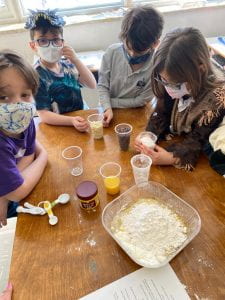 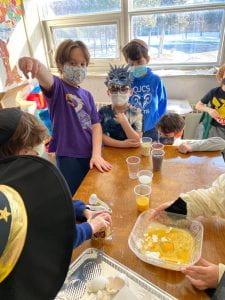 Hello today I am writing about OJCS and for Purim we did a lot of great games. But there was one really good game that both classes played. It was called the Hebrew Purim Game. What we did was there were groups of two or three people. They got about ten sheets. They had to answer the questions on the sheets (as well as Colour and circle) There had to be one winning team and they would get a prize. At the end to get the prize(of free time) they had to find a picture of המו on the back of the door 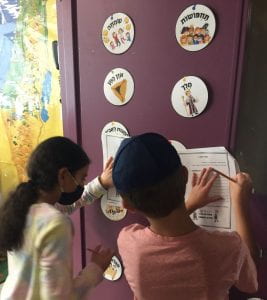 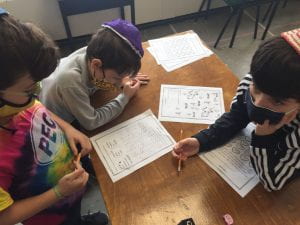 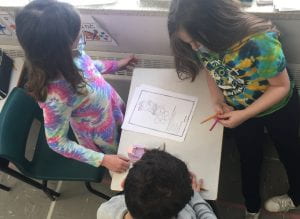 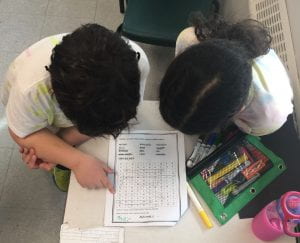 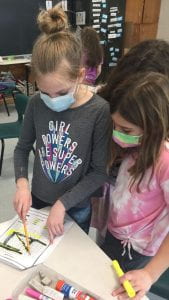 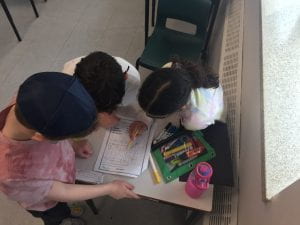 About the Purim carnival🎡,

The Purim carnival was so much fun, there were so many stations.

My favourite one was Dino dig, how we played, the first person to get 2 eggs first wins. But I’m not writing this just to explain how to play each game besides I don’t even know how to play most of them, I’m writing this so I  can tell you how much fun this was but I just need to tell you how to play one more, OK so this game was also my favorite one it was who can stack the highest tower with plastic cups but it was harder because it was a bit windy so the cups kept falling off the table it was a bit frustrating but still fun.

I liked Purim because the carnival was fun and I got a lollipop from a game called snowball and all the other games were fun here’s an example there was a donut game where they Tie a string to the donut and the string was on a ruler and you close your eyes and try to find the donut and they hold the ruler you try to eat the donut closing your eyes so that was the example bye.

Best of Purim by Gila 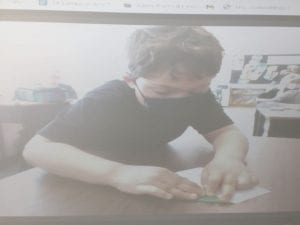 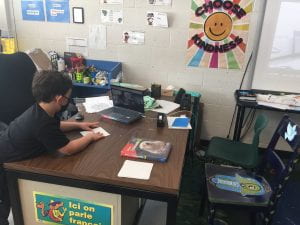 Teaching origami frogs was fun, but hard.  It was hard because everyone was yelling and I had to go from 3a to 3b every single fold, and trust me it was a lot harder than I thought it would be to teach an origami frog. I thought it would be pretty simple for the class to learn, but I guess everyone has to start somewhere. When I first started I was 3, but I caught on pretty quickly.  I do practice a lot so that’s one reason why my folds are now so precise. So, if you try to teach origami beware it is very hard! If you want to see some harder origami creations that I made be sure to check out my soon to be published origami blog. 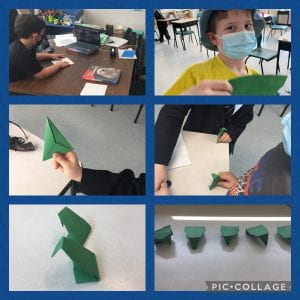 About the Purim games.

Ok, so now that you know we made Purim games now I need to tell you how we made them in the first place. The one that my group made was made from paper, and our characters were made from paper as well.

But other people made theirs with paper and cardboard.

In the end, we all played the games, it was a lot of fun. just saying do you like the title? hahaha. 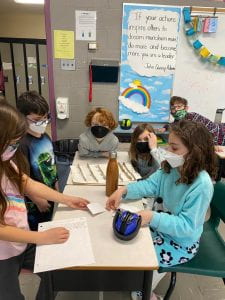 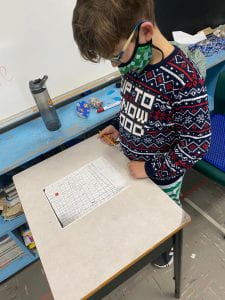 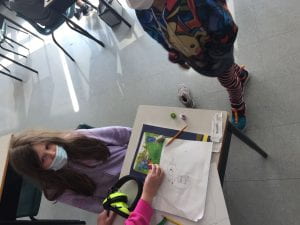 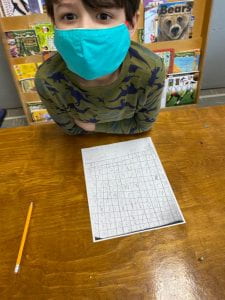 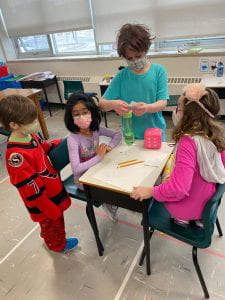 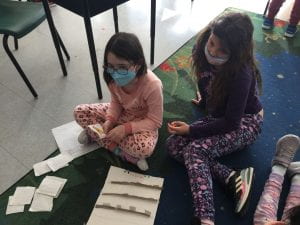 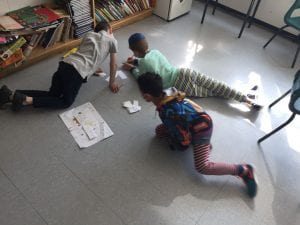 Once upon a time there was a little dude in a little thing but he was so kind and nice 👍 and appreciate and he made a beautiful little party 🎉 on Purim day and everyone came it was so fun I called it a Purim carnival 🎡 that’s how fun it was and then I went home 🏡 and started crying 😭 wa wa I wanted to go back to the party 🎊 I started crying again even more wa wa wa wa wa wa wa the end of life ha ha.

I didn’t like Purim because I had too many visitors at home. At school I had fun though and it was spirit week and I didn’t like the origami frog so I turned it into a zombie villager On Purim I also was a koala but people thought I was a mouse. On mythical Monday I was a scarecrow.

A Purim Poem by Noa

Purim is fun and Haman is bad.

The carnival was well planned and a blast!

I love Purim and hope you do too.

I had so much fun. How about you?

A Purim video by Re’em